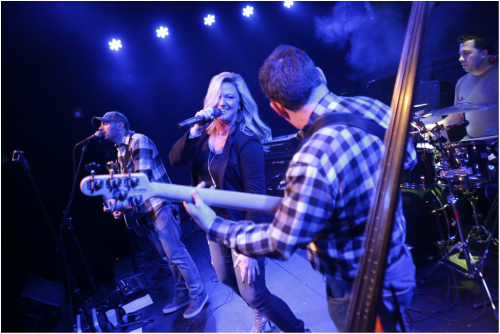 COUNTRYFEST headliner Annie Brobst enjoys “genuine interactions” with her fans, mingling with the crowd, and singing and dancing alongside people who are having a good time during her shows. (Justin Mayotte Photography)
LYNNFIELD — Country pop songwriter and singer Annie Brobst said she was in a bad situation when she wrote “Paper Weight.”
“I was being held down and this was my way out,” she said. “Writing my own songs, empowering myself and breaking free.”
Though she never received formal training, her music has drawn attention far and wide, having been named New England Music Awards Country Act of the Year for 2016. In a few weeks, she will be the headline performer in Lynnfield’s Countryfest outdoor event on the town commons on Saturday, July 23 from 3 to 8 p.m.

“If sitting in front of my stereo in my bedroom as a kid singing to Britney Spears and Christina Aguilera counts for anything, that was the extent of my formal music training,” she said. “Dance moves included. Or, I would call my closest friends, setting the phone down and forcing them to listen to me sing. All of that seemed pretty special, but it’s the true extent of my training.”
Inspired by Lambert, Sugarland, Nicks

Originally from Columbus, Ohio, Brobst joked that what brought her to the Boston area was a U-Haul, literally. That, and a relationship she formed in her senior year of college.

“If there’s any time to do something on a whim, I thought, ‘this is it.’ My title track ‘Ghost’ on my first EP (extended play) coming out this September tells that story,” she said.

Miranda Lambert is one of her “chick heroes” and Brobst said that she is often compared to Lambert.

“It’s a huge compliment,” she said. She also has been compared to Sugarland, Jennifer Nettles being another one of her idols.

“And we do a mean acoustic cover of ‘Landslide,’ so probably a little Stevie Nicks in there, too,” said Brobst, whose vocals range from alto to second soprano.

Part of Brobst’s charm is her self-effacing manner.

Brobst has written most of her own lyrics but she has teamed up every time with her musical partner-in-crime Rodger Hagopian.
“He’s the master of melody and a fixture in my full band,” she said. “Rodger also has a number of his own songs out on iTunes with his band, Force The Fallen.

Other co-writers of her original songs include Drew Smith and Michael Cohen.

“And I can’t forget to acknowledge the amazing arsenal of musicians that my producer Sean McLaughlin of 37 Productions brought on to record my EP. Their take on our melodies brought these songs to life like I’ve never heard them before — banjo, fiddle and pedal steel, to boot!”

Like any artist, every song Brobst writes springs from a different inspiration — from military service stories to love and heartbreak.
“But more generally speaking, my dad Jim and brother Levi inspire me,” commented Brobst. “Hard work, honesty and strong relationships by their example push me to be a better person and contributor every day.”

Cherishes being a role model
If all musicians and creative people have deep hearts and souls, then Brobst fits right in.

“I love three things about my career as a singer/songwriter,” said Brobst. “First, I love providing the soundtrack to the best nights of my friends’ and fans’ lives — their smiles, laughter and genuine positivity at shows as I look out at them will always be priceless to me. Second, I love singing my stories, which make me different from every other female country singer, and I hold that distinction dearly. Our stories will set us all apart if we stay true to ourselves.”

The third bullet point that Brobst loves about her career includes what she hopes to accomplish. In teaching varsity soccer and softball, she said she has encountered a lot of what she calls “amazing, talented and strong young women in need of guidance and positive role models.”

“It’s also teaching them to always chase their dreams,” she continued. “I think this world can use a whole lot more people doing what they love and loving what they do, and that starts with these young women giving it a shot and having the confidence to do so.”

Brobst does not write her own melodies, mainly because she does not play any musical instruments.

“My band won’t let me even hold a tambourine; that gets ugly fast,” she said.

“I love providing the soundtrack to the best nights of my friends’ and fans’ lives — their smiles, laughter and genuine positivity at shows as I look out at them will always be priceless to me.”
~ Annie Brobst,
New England Music Awards Country Act of the Year

After singing an a cappella verse and chorus of her original ‘Write Me A Song’ (also on her EP set to release in September), she was apologetic for having no guitar to accompany her at the time.

“Chris looked at me and said, ‘Honey, with a voice like that you don’t need to play guitar.’ Coming from someone who’s heard a lot of singers in his time — and great ones — his message rings true,” she added. “I’ve worked hard to get better at the instrument I can play.”
She said that her fellow artist and close friend Fil Pacino made another interesting point.

After seeing her perform many times, including at his “Death by Lions” CD release party, he told her, “In a sense the audience is your instrument, as I have seen you play them on a number of occasions and you honestly do it better than almost anyone in the scene. … it’s honest and you can tell you love what you do.”

Thrilled to play Countryfest
Brobst said she and her band were thrilled when they were approached to headline Lynnfield Countryfest by the event’s sponsors, Lynnfield Recreation.

“We’ve developed a pretty great following in the North Shore area and this show is close enough for these friends and fans to attend. Plus, it’s an outdoor stage and inclusive to all ages, which only adds to the appeal. If you’ve never seen us before, we kick every show off with an original song from the EP, we go old school and new school country, we cover chick country and bro country equally — so although I love my female country idols you won’t just be seeing a Miranda Lambert cover band — we play sing-alongs that everyone knows and I love using my wireless mic to get out into the crowd and dance and sing right alongside people having a great time,” she said.

Brobst said she treats everyone in front of her like they’re friends she’s known forever.

“I talk to them and hang out with them during the show,” she explained. “Genuine interactions have taken me a long way with stage presence. I can’t wait to meet and see all of my new friends at this year’s event.”

When not performing, Brobst was a teacher in the Salem public school system.

“After being there for eight years, this was my last year with them as I’ll take next year to focus on making music my career and taking the time to concert my energy and shoot for this dream,” she said.

“I taught Spanish to middle school students and it’s been one of the toughest decisions I’ve ever made to step away from that. But depending on what happens, there may be a day that I go back to it. I’ve said it before and I’ll say it again — it’s truly one of the most rewarding careers to be able to fall back on.”

Balancing her day job and her music career has been a challenge for Brobst.

“I balanced it well for a while. As we started to gain more attention in the music world, the upcoming CD release, and the recognition of winning 2016 Country Act of the Year through the New England Music Awards, my schedule started to fill very quickly,” she said. “Marketing and managing myself is absolutely a full-time job and it was time to either give it the attention it deserves or give it up. I chose the former.”

Brobst considers herself “extremely lucky” to have people in her life who are supportive and someone at home who is ready to be right by her side for the demanding and “crazy roller coaster journey” ahead in the music world.

Brobst also will appear at the 2016 Topsfield Fair coming at the end of September.

“This is a first,” she said. “Since moving from Ohio in 2007, it’s been a personal goal to perform at the Fair. Some of the best local acts play there as well as a handful of national acts, so to be among them is truly an honor.”

How to get tickets
Tickets to Countryfest are $20 per person. They can be purchased at the Lynnfield Recreation office at Town Hall, 55 Summer St., or ordered online by using the link on the Lynnfield Rec page of the town of Lynnfield’s website (www.town.lynnfield.ma.us/rec), then following the steps to create an account. Free parking will be available at Lynnfield Middle School, a short walk to the common.
Countryfest also features Alec MacGillivray, a rising star who has opened for Keith Urban, Kellie Pickler and Gloriana. Adding to the festival atmosphere will be a cornhole tournament, line dancing, mechanical bull riding, a food truck and a beer and wine garden.
Child care with games, entertainment and food will be provided by Lynnfield Rec staff at the middle school for an additional fee of $10 per child. (Minimum age: 6 and up; child must have completed kindergarten or be entering at least first grade in the fall.)